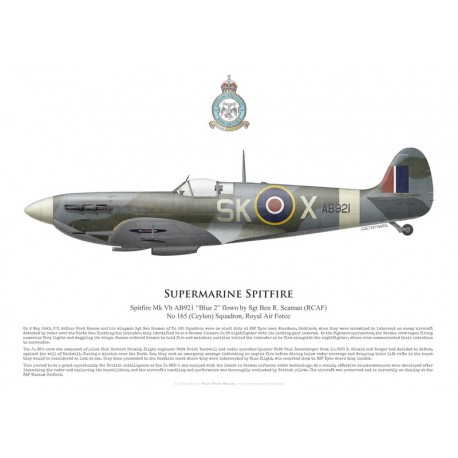 On 9 May 1943, F/L Arthur Ford Roscoe and his wingman Sgt Ben Scaman of No 165 Squadron were on alert duty at RAF Dyce near Aberdeen, Scotland, when they were scrambled to intercept an enemy aircraft detected by radar over the North Sea. Spotting the intruder, they identified it as a German Junkers Ju 88 nightfighter with its landing gear lowered. As the fighters approached, the German crew began firing numerous Very lights and waggling its wings. Roscoe ordered Scaman to hold fire and maintain position behind the intruder as he flew alongside the nightfighter, whose crew communicated their intention to surrender.

The Ju 88's crew was composed of pilot Oblt Herbert Schmid, flight engineer Obfw Erich Kantwill and radio operator/gunner Obfw Paul Rosenberger from 10./NJG 3. Schmid and Berger had decided to defect, against the will of Kantwill. During a mission over the North Sea, they sent an emergency message indicating an engine fire before diving below radar coverage and dropping their life rafts in the hopes they would be considered as lost at sea. They then proceeded to the Scottish coast where they were intercepted by Blue flight, who escorted them to RAF Dyce where they landed.

This proved to be a great opportunity for British intelligence as the Ju 88R-1 was equiped with the latest in German airborne radar technology. As a result, effective countermeasures were developed after inspecting the radar and exploring its capabilities, and the aircraft's handling and performance was thoroughly evaluated by British pilots. The aircraft was preserved and is currently on display at the RAF Museum Cosford.