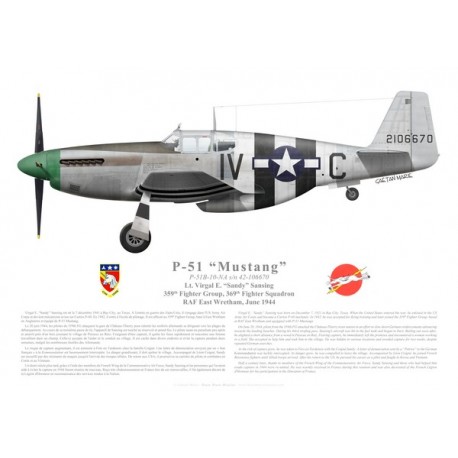 Virgal E. “Sandy” Sansing was born on December 7, 1921 in Bay City, Texas. When the United States entered the war, he enlisted in the US Army Air Corps and became a Curtiss P-40 mechanic. In 1942, he was accepted for flying training and later joined the 359th Fighter Group, based at RAF East Wretham and equipped with P-51 Mustangs.

On June 20, 1944, pilots from the 359th FG attacked the Château-Thierry train station in an effort to slow down German reinforcements advancing towards the landing beaches. During his third strafing pass, Sansing's aircraft was hit in the fuel tank and began to burn. Bailing out soon after, he alighted a short distance from a wood in Puiseux en Retz. Fearing capture, he immediately left the premises and encountered a woman working in a field. She accepted to help him and took him to the village. He was hidden in various locations and avoided capture for two weeks, despite repeated German searches.

As the risk of capture grew, he was taken to Fère en Tardenois with the Coigné family. A letter of denunciation sent by a “Patriot” to the German Kommandantur was luckily intercepted. As danger grew, he was compelled to leave the village. Accompanied by Léon Coigné, he joined French Résistance fighters until Allied troops arrived. After his return to the US, he pursued his career as a pilot and fought in Korea and Vietnam.

Half a century later, thanks to members of the French Wing of the Commemorative Air Force, Sandy Sansing and those who had helped him evade capture in 1944 were re-united. He was warmly received in France during this reunion and was also decorated of the French Légion d'Honneur for his participation in the liberation of France.