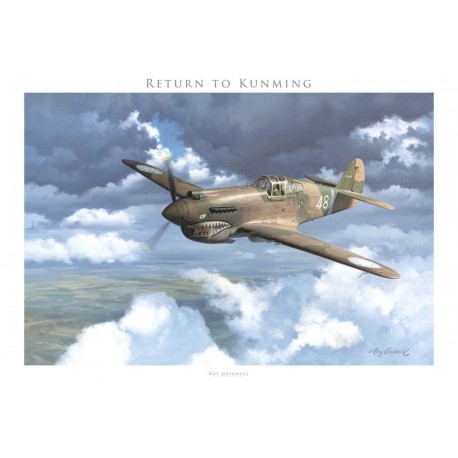 By buying this product you can collect up to 40 loyalty points. Your cart will total 40 points that can be converted into a voucher of 4,00 €.

By buying this product you can collect up to 40 loyalty points. Your cart will total 40 points that can be converted into a voucher of 4,00 €.

Members of the American Volunteer Group, popularly known as the “Flying Tigers”, were volunteers serving alongside the Chinese against the Japanese invasion. The first combats took place on December 20, 1941, only a few days after the Japanese attack on Pearl Harbor. The American pilots, flying Curtiss P-40 Tomahawk initialy intended for British forces, destroyed 115 Japanese aircraft for the loss of 14 pilots. In July 1942, the group returned under American control, becoming the 23rd Fighter Group.

« Tex » Hill became a Navy bomber pilot in 1939 before volunteering for the Flying Tigers. He scored his first two victories on January 3, 1942 and had become an ace by the 24th. In March, he took command of the 2nd Pursuit Squadron of the AVG. By the time the AVG was returned to US control, he had scored 12.25 victories.

Tex Hill was one of only five Flying Tigers to join the 23rd FG, which he eventually commanded. Before returning to the Unites States in 1944, he had scored another six victories, bringing his total to 18.25 aerial victories.

He served with the Texas Air National Guard after the war and returned to combat in Korea. He retired with the rank of Brigadier General and passed away on October 11, 2007.

NB: The preview presented on this page is representative of Large format (A3+) copies of the painting. Medium (A4) and small formats (A5) may vary slightly because of the different proportions of the canvas.

All copies of Roy Grinnell's paintings are shipped with a separately-printed description. Please select the desired language for the description in the drop-down menu.

7 other products in the same category: