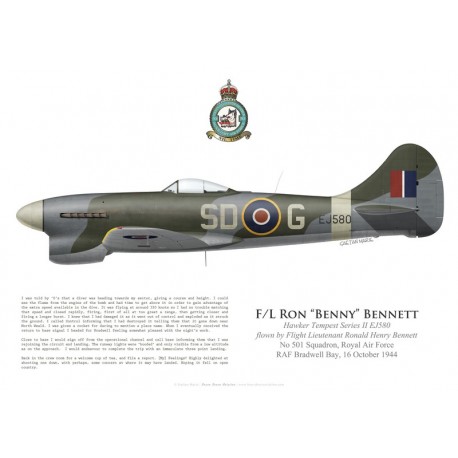 F/L Ronald Bennet was credited with four confirmed victories against V-1s during the German attack of the United-Kingdom with "buzz bombs".

"I was told by ‘0’s that a diver was heading towards my sector, giving a course and height. I could see the flame from the engine of the bomb and had time to get above it in order to gain advantage of the extra speed available in the dive. It was flying at around 350 knots so I had no trouble matching that speed and closed rapidly, firing, first of all at too great a range, then getting closer and firing a longer burst. I knew that I had damaged it as it went out of control and exploded as it struck the ground. I called Control informing that I had destroyed it telling them that it gone down near North Weald. I was given a rocket for daring to mention a place name. When I eventually received the return to base signal I headed for Bradwell feeling somewhat pleased with the night’s work.

Close to base I would sign off from the operational channel and call base informing them that I was rejoining the circuit and landing. The runway lights were ‘hooded’ and only visible from a low altitude as on the approach.  I would endeavour to complete the trip with an immaculate three point landing.

Back in the crew room for a welcome cup of tea, and file a report. [My] Feelings? Highly delighted at shooting one down, with perhaps, some concern at where it may have landed. Hoping it fell on open country."

14 other products in the same category: