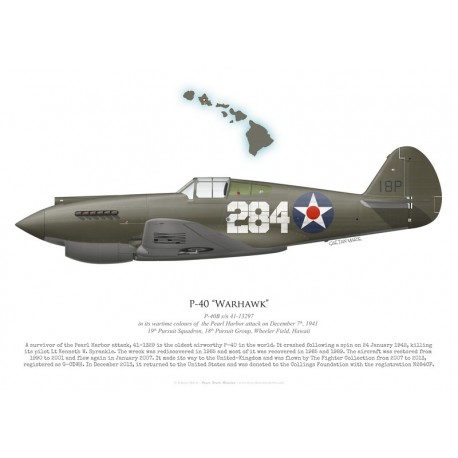 A survivor of the Pearl Harbor attack, 41-1329 is the oldest airworthy P-40 in the world. It crashed following a spin on 24 January 1942, killing
its pilot Lt Kenneth W. Sprankle. The wreck was rediscovered in 1985 and most of it was recovered in 1985 and 1989. The aircraft was restored from
1990 to 2001 and flew again in January 2007. It made its way to the United-Kingdom and was flown by The Fighter Collection from 2007 to 2013,
registered as G-CDWH. In December 2013, it returned to the United States and was donated to the Collings Foundation with the registration N284CF.

22 other products in the same category: