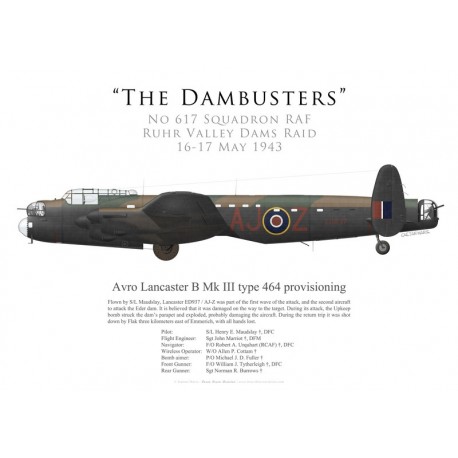 Operation Chastise took place during the night of 16-17 May 1943 and was meant to destroy dams in the industrial Rühr region. Bouncing bombs designed by Barnes Wallis were dropped by specially-modified Lancasters led by Guy Gibson, and succeeded in breaching two of the three dams. Gibson was awarded the Victoria Cross for his part in the raid.

Avro Lancaster B Mk III type 464 provisioning
Flown by S/L Maudslay, Lancaster ED937 / AJ-Z was part of the first wave of the attack, and the second aircraft to attack the Eder dam. It is believed that it was damaged on the way to the target. During its attack, the Upkeep bomb struck the dam’s parapet and exploded, probably damaging the aircraft. During the return trip it was shot down by Flak three kilometers east of Emmerich, with all hands lost.

11 other products in the same category: