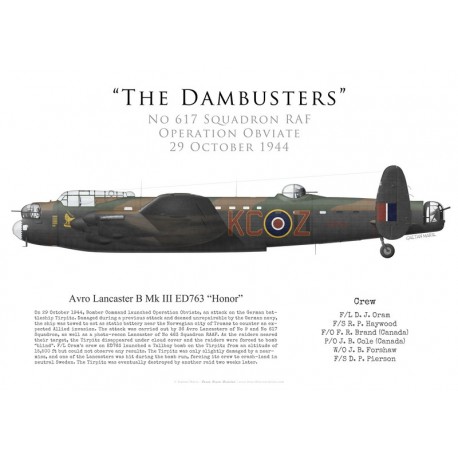 On 29 October 1944, Bomber Command launched Operation Obviate, an attack on the German battleship Tirpitz. Damaged during a previous attack and deemed unrepairable by the German navy, the ship was towed to act as static battery near the Norwegian city of Tromsø to counter an expected Allied invasion. The attack was carried out by 36 Avro Lancasters of No 9 and No 617 Squadron, as well as a photo-recon Lancaster of No 463 Squadron RAAF. As the formation neared its target, the Tirpitz disappeared under cloud cover and the raiders were forced to bomb “blind”. F/L Oram’s crew on ED763 launched a Tallboy bomb on the Tirpitz from an altitude of 15,500 ft but could not observe any results. The Tirpitz was only slightly damaged by a near-miss, and one of the Lancasters was hit during the bomb run, forcing its crew to crash-land in neutral Sweden. The Tirpitz was eventually destroyed by another raid two weeks later.