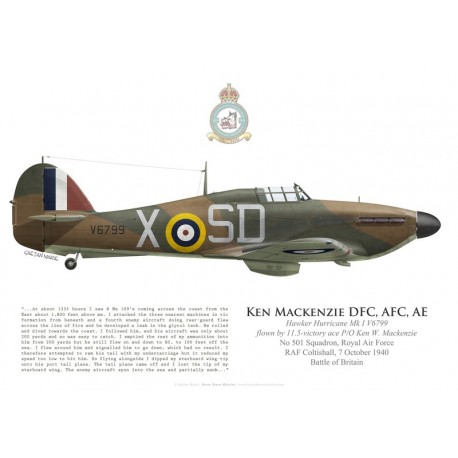 On 7 October 1940, Battle of Britain Hurricane ace Ken Mackenzie damaged a Messerschmitt Bf 109 and ran out of ammunition. Fearing the enemy pilot would make it back to base, Mackenzie rammed him with his satboard wing, sending it down into the sea. Mackenzie was credited with 11.5 aerial victories before he was shot down and captured in September 1941.

"...At about 1335 hours I saw 8 Me 109's coming across the coast from the East about 1,800 feet above me. I attacked the three nearest machines in vic formation from beneath and a fourth enemy aircraft doing rear-guard flew across the line of fire and he developed a leak in the glycol tank. He rolled and dived towards the coast. I followed him, and his aircraft was only about 200 yards and so was easy to catch. I emptied the rest of my ammunition into him from 200 yards but he still flew on and down to 80, to 100 feet off the sea. I flew around him and signalled him to go down, which had no result. I therefore attempted to ram his tail with my undercarriage but it reduced my speed too low to hit him. So flying alongside I dipped my starboard wing-tip onto his port tail plane. The tail plane came off and I lost the tip of my starboard wing. The enemy aircraft spun into the sea and partially sank..."