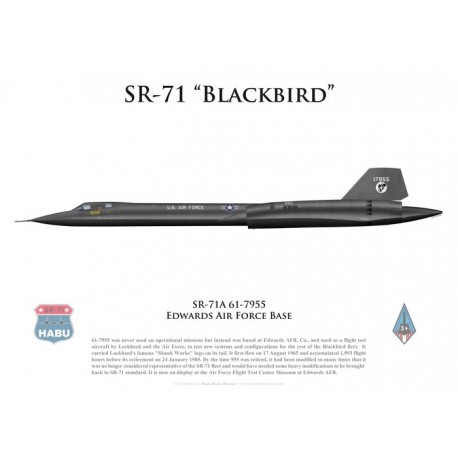 61-7955 was never used on operational missions but instead was based at Edwards AFB, Ca., and used as a flight test aircraft by Lockheed and the Air Force, to test new systems and configurations for the rest of the Blackbird fleet.  It carried Lockheed's famous "Skunk Works" logo on its tail. It first flew on 17 August 1965 and accumulated 1,993 flight hours before its retirement on 24 January 1985. By the time 955 was retired, it had been modified so many times that it was no longer considered representative of the SR-71 fleet and would have needed some heavy modifications to be brought back to SR-71 standard. It is now on display at the Air Force Flight Test Center Museum at Edwards AFB.