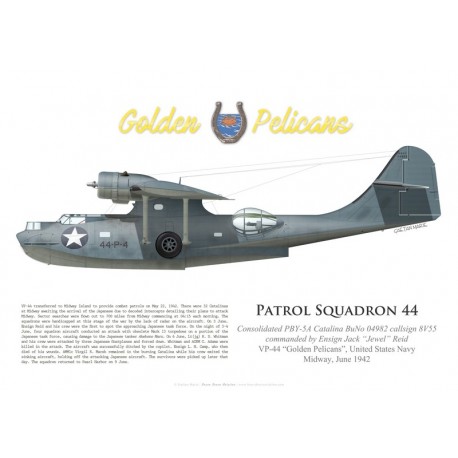 VP-44 transferred to Midway Island to provide combat patrols on May 22, 1942. There were 32 Catalinas at Midway awaiting the arrival of the Japanese due to decoded intercepts detailing their plans to attack Midway. Sector searches were ﬂown out to 700 miles from Midway commencing at 04:15 each morning. The squadrons were handicapped at this stage of the war by the lack of radar on the aircraft. On 3 June, Ensign Reid and his crew were the ﬁrst to spot the approaching Japanese task force. On the night of 3–4 June, four squadron aircraft conducted an attack with obsolete Mark 13 torpedoes on a portion of the Japanese task force, causing damage to the Japanese tanker Akebono Maru. On 6 June, Lt(jg) R. S. Whitman and his crew were attacked by three Japanese ﬂoatplanes and forced down. Whitman and ACRM C. Adams were killed in the attack. The aircraft was successfully ditched by the copilot, Ensign L. H. Camp, who then died of his wounds. AMM1c Virgil R. Marsh remained in the burning Catalina while his crew exited the sinking aircraft, holding off the attacking Japanese aircraft. The survivors were picked up later that day. The squadron returned to Pearl Harbor on 9 June.